The Homecoming Of Ulysses

The homecoming is an intercultural opera in

The homecoming is an intercultural opera in collaboration with municipality Amsterdam-west and the Amsterdam Andalusian Orchestra. This project brought people together through music, not only from the Baarsjes neighbourhood but musicians from all around the world. The focal point was Monteverdi’s opera Il Ritorno d’Ulisse in patria. After the Trojan war, Ulysses roams the Mediterranean sea, unable to find his way home because of a curse. His wife Penelope waits for him at home, not knowing whether her loved one is still alive. In addition to the melodies of the original opera, Turkish and Arabian songs were intertwined in the performance. The songs of the show were chosen based on conversations with people from the Baarsjes neighbourhood on the subjects of roaming and homecoming. The ensemble, was played by a combination of baroque specialists and Arabian and Turkish musicians, led by oud player Haytham Safia, with Sinan Vural as Ulysses and Camille Louise Hesketh as Penelope. 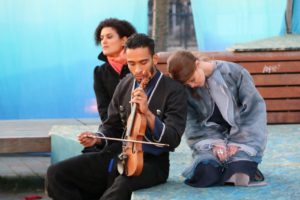 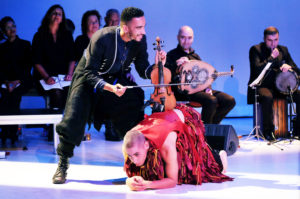