A new interpretation of an unknown gem

A new interpretation of an unknown gem in the history of music: Giacomo Carrisimi’s oratorio ’Jephte’. With music, dance and rituals from the many cultures that are present in Amsterdam. A universal story about surrendering, change and connection. Do we meet each other in our sacrifices? The Italian baroque music is played by Haytam Safia and ensemble, with baritone Sinan Vural as Jephte and soprano Aylin Sezer as his daughter. Winti priest Marian Markelo sang about the death and resurrection of the daughter with Afro-Surinam Winti songs. For the new ending, in which hope and new life arise out of the story’s sacrifice, the Iranian composer Aftab Darvishi was inspired by Arabian, Persian and Afro-Surinam trance rituals. Directed by Miranda Lakerveld, choreography by Christian Guerematchi and masks by visual artist Boris van Berkum. Aylin Sezer won the Schaunard Award for her role as Filia. 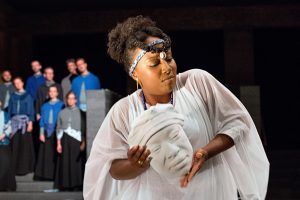 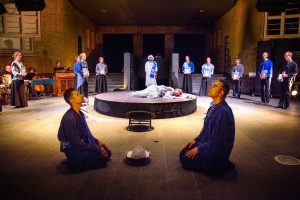 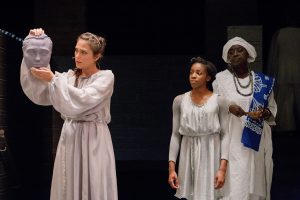 Dance With The Seven Veils